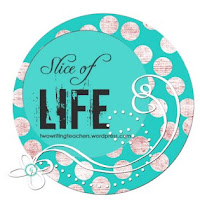 Here we are on day 13 of the Slice of Life March - a writing challenge hosted by Stacey and Ruth at "Two Writing Teachers". It has been a bit of a challenge, but well worth the effort - especially the chance to meet the other slicers.

I was trying to plan what I would create for the collage for "Collage Obsession's" art challenge this week. The theme was "fairy tales" and instead of art, my first thought was a modern fairy tale. I hope to adapt it to a collage later.

Once upon a time in a land not too far away, a young girl dreamed of being a writer and an artist. She wrote stories and drew pictures.
But she grew up and put away her dreams. She became a teacher, married, had children, divorced, remarried. Then her children moved out and began their own lives.

Slowly, those old dreams began to resurface. She painted and collaged, took some courses and made art.
One day, she picked up a pen and wrote a story and then another.

Those childhood dreams had blossomed. She dared to call herself an artist and a writer.

Labels: Slice of Life for March

Never let your dreams die...sounds like you just put them on hold for a bit! Looking forward to seeing some art!

Remember all the stories of those 'older' Cinderellas like Grandma Moses, and so on. Keep dreaming, Beverley!

Have fun creating the collage...fairy tales can be a great source of inspiration...

Your post gives me hope that I can also find that hidden self that is buried behind being mom, teacher, sister, daughter, friend, mentor, etc.

I love how the princess in this fairy tale doesn't wait for rescue, but discovers her own way.

I would say this is a true life fairytale. Dreams can come true. Here is to the artists and writers in all of us!

This is an amazing story! Good for you (at least, I'm assuming you...) for allowing yourself to follow your dreams.

Love this! And it seems like there is something hugely important about a woman being able to write the fairy tale of her own life! I can't wait to see the collage!

A lovely story, showing how you came to take that brave step and become the 'you' you dreamed of being. It goes so well with the collage.