ABC Wednesday - M is for Money

Today at ABC Wednesday, the letter of the week is M.

As I thought about it, I realized that on my last trip to Mexico I had to use 2 different foreign (!) currencies. I found the Mexican money difficult to use at first - it took some time to realize that 100 pesos really wasn't all that much! There paper money was different sizes as well as different colours. 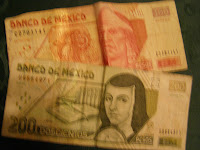 Then when we stopped over in Detroit on the way back I had to readjust to American money. After using coloured bills at home for so long, I really have to look carefully at each bill to be sure that I am not giving away a $10 rather than a $1.)).

We now in Canada have 2 coins to replace the $1 and $2 bills. I have gotten used to the loonie and toonie now, but it did take some getting used to. 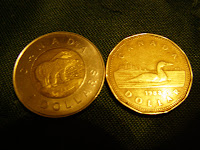 Now that the Canadian dollar is almost on par with the U.S., people here in Canada are worried.

It will be interesting to see what happens in the months to come.

Money can cause problems and many people use money as the excuse for wrong-doing. There are so many quotes about money. Here are a number of sayings:

"Money is the root of all evil."

"Money is power, freedom, a cushion, the root of all evil, the sum of blessings." ~Carl Sandburg

"Money never made a man happy yet, nor will it. The more a man has the more he wants. Instead of filling a vacuum, it makes one. " Benjamin Franklin

"Don't tell me where your priorities are. Show me where you spend your money and I'll tell you what they are." James W. Frick

"Money is the barometer of a society's virtue." Ayn Rand

"There are no pockets in a shroud." ~Author Unknown

Be sure to visit the other great participants here.

Posted by Beverley Baird at 4:54 AM

A fun and interesting post. I like the loonie and toonie...how did they come up with that...

This is indeed a really interesting post about money, love your quotes and like Carol wonder how they came up with the loonie and toonie! how funny! Have a great week, Beverley!

Over here we also have the one dollar coin, it's smaller in size compared to the 50cents coin but in gold color instead of silver. The notes are also colourful so it's quiet easy to tell them apart without the need to actually look at the number.

Now that is what I want, money!! Happy Wednesday!

Great quotes and money can definitely get us into trouble . Sometimes it is hard to get use to all the different types of money. Good post.

Wow. So interesting. I think it would be hard to get used to using a coin for a dollar. I don't ever use them here in the US. Paper all the way : )

You're right about the US/Canadian exchange. the US had gotten so arrogant about its dollar being worth a third more that the Americans are a little crestfallen.

Of course the greatest philosopher about money was Berry Gordy: "The best things in life are free, But you can't give them to the birds and bees. I need money!"

Money worked for me too! Good one!

Excellent comments on money. Money certainly seems to have taken priority over integrity. When I was in my teens the Canadian dollar was worth more than the American and it was great fun to go shopping in the States. If it was okay then why is it bad now?

you said you step over to Detriot, are you from Windsor? I was at Windsor U in 1975 to 77. Been looking for friends from Windsor or near by.

That's crazy ! I raked my brain to find words with M, but never thought about money, lol !
Gattina from the ABC Team

It is true about the value of the US DOLLARS,huh?
Great quotes on money.
Have you a great week now.
hugs
shakira

Money makes the world go around! clever take on the letter M.

It's confusing trying to get used to two different currencies in a short time, isn't it? We now have one- and two-pound coins and I hate them. Give me paper money every time - but I do wish the US would make it easier to distinguish between the different notes!

BTW, my site is back up now, in case you tried earlier! :)