This week I have been finally able to attack my clutter. Right now I am trying to organize teaching files and units. I eventually hope to reclaim the family room and transform a back room into an art studio for me! Big plans, a lot of work but I really need to downsize (talk to my kids and they'll tell you the same thing!) Mostly though, I want to be able to create in a lovely space rather than at the dining room table and, I want to be able to find what I need, when I need it.

This past week as well as been an active one creatively. Being a part of Jamie Ridler's "Wreck This Journal" has been fun, even challenging at times. I'm finally letting go and just doing the pages.

But the doing has lead me to try other things as well. I am taking a lot of photos - skies, clouds, flowers: 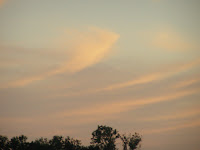 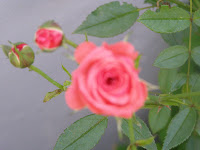 I signed on for Rowena's "100 in 100" and altho I have been trying to be creative every day, it has been a challenge. Then this week I had the idea to create a deck of cards in collage. I had seen a challenge where each week participants created a card based on a prompt. I liked the idea, but several months had passed already when I heard about it.

I have the first 2 sets (almost) done. What I am looking for is some honest feedback. This is where the giveaway comes in!

As this is the first time I have attempted something of this scope, I would like to see what else I might add to them. Any ideas?


The first set I did was the A's - for angels. Each card has a different angel with a different word. 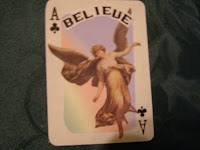 The second set is J - for Jackson. (in memory). Each card has 2 different pix of MJ.

Anyone who offers any feedback will be entered into a draw for one of the angel cards ( 4 draws in all!) . Leave a comment for either question (or both - each answer puts your name in the draw) by Fri. July 17 and the winners will be announced Sat. July 18.
Thanks in advance!
Posted by Beverley Baird at 8:11 PM

Five - fingers and toes. Rings on her fingers, bells on her toes.

Six - Sing a song of six pence. Pick up sticks.

"Princess Bride" - Ingino Montoya looking for the 6 fingered man. "You killed my father, prepare to die."

What about sixth sense for the sixes and cats nine lives) for the nines?

Good luck with your clearing out, it will be great to have your own space.

Your photos are beautiful, what an amazing sunset.

You are certainly making good use of your time off.

It'll feel great to have your own art space...I'm slowly getting mine together and I'm quite pleased with myself -- it's just a corner of the bedroom but its' MINE!! :)

Nine - first thought is 'beyond the ninth wave'-- it's a concept from Celtic legend -it's mentioned in the sagas - The Mabinogian sp? etc. as well as being a sea-faring legend of there being the 'ninth wave' which is the one that claims shipwreck survivors

So...a nautical theme for that one? *grin*

For six, I came up with sixpenny sweets (candy) -- something I used to hear about growing up..and five -- all I have is 'five golden rings' from the 12 Days of Christmas! ;)

Happy creating -- you're a flurry of inspiration!!
xo

oh how I can relate to this post! I have been working on clutter and downsizing while also trying to create a nice space to create in! AND work in! I participated in a DECK OF ME a year ago and really enjoyed the year-long project. We would receive a prompt every week to design our cards by ....I agree about 9 lives for cats or 9 innings? For 5's how about 5 stars or 5 rings?? With 6 all I can think of this morning is like 666 which I am sure you would not want to mess with! haha

Thank you so much for these wonderful ideas! I may have to draw an idea from a hat!
Mel - the golden rings was the first thing I thought of too. thanks for the website. I will check it out.
Melinda - I couldn't remember where the site was for the cards but it sounded like such a neat idea. Do you have a pix of your set or the website?
Leone - thanks for your support and ideas. Both are much appreciated.
Kirby - I love all these ideas - could put a verse on the card - hadn't thought of that!
Thanks again!

*blush* I am more of a lurker than a commenter but I am really glad you have liked the comments I have left....

Not sure about ideas for those numbers..

Nine planets (if you include Pluto)
sixth sense - all the paranormal and world of spirit and everything...

there are SIX basic animal groupshttp://animals.about.com/od/animalswildlife101/a/guidetoanimalsa.htm

Thanks Rose and Judi. It is going to be very difficult now to choose! So many good ideas. I may have to make several sets of the cards! lol
Take care and thanks so much - everyone!!!