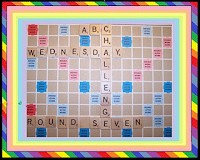 Once again it is time for ABC Wednesday - that fun, weekly, alphabetical meme.
W is our focus for the week - hard to believe we are so near the end!


There are so many wonderful "W" artists:

Andy Warhol -( 1928 – 1987) was an American painter, filmmaker and printmaker. He started as an illustrator and was soon the leading figure in Pop Art.

James Whistler - (1834 1903) - an American painter, although he lived and worked in Britain. His most famous painting was one dubbed "Whistler's Mother".

Andrew Wyeth - (1917-2009) - an American painter, often referred to as the "Painter of the People". He was mainly a realist painter and his subjects were often the people and land around him.

Christina's World - one of his most famous pieces.

(In fact, a gallery in his name is in Kitchener - 20 minutes from my home- and offers art courses, as well as an opportunity for artists to show their work)


One of her most famous pieces - a quilted piece.


And of course:
Wishing all of you a Wonderful Christmas
Be sure to visit the great participants here.
Posted by Beverley Baird at 9:38 AM

Thank you and here's wishing you a wonderful Christmas and the best 2011 ever.

Terrific and entertaining post as always, Bev!!Love all your artists for the week! Wishing you and your family a very Merry Christmas! Enjoy!

Wow, Bev! Fabulous collection of artists here. I'd love to take a course in art appreciation - no talent here in any way shape or form. lol Have a wonderful Christmas! :D

Thank you for the educative post and enjoy a wonderful holiday season !!

I love all the paintings posted -- especially Andrew Wyeth's. But even more especially I love the "Symphony in White". Thanks for your always interesting and informative posts.

another mix of the familiar - the 1st 3 - and those I don't know well.
good info.
ROG, ABC Wednesday team

Good heavens, you know, every time I go to Kitchener, I mean to look up just who this Homer Watson was. Thank you! I cannot believe I was not familiar with his work.

Artists I recognize! Woot woot! I'd heard of Wieland but had never seen her work. Great stuff. Perfect W post.

Wishing you the best of holidays.

Warhol and Whistler I know of but the others are new to me. Wonderful:-)

Warhol, Whistler and Wyeth I'm more familiar with - thank you for the images and the narrative. Always a pleasure to read and see. Merry Christmas to you and yours!