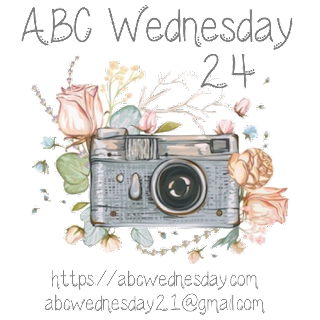 We are now starting Round 24!  A new year and a new round.

This round I plan to focus on actions that can be taken to make this the best year ever, and will use a journal to create a page of quotes.

A is for A new year. 2019 has the potential to be a turbulent year, carrying on from the upheaval and discord that has spread like a cancer around the world;
-where a U.S. president is under intense FBI scrutiny and lies repeatedly
-where populism and white supremacy is exploding, world-wide
-where racism has reared its ugly head
-where even schools and churches are no longer safe from gun violence.

But we do not have to succumb or surrender to the hate and negativity of last year.
We need to act.
We need positive, assertive actions and attitudes to push back that negativity.

Yes. It is A NEW YEAR. A year
- to take action
-to adjust attitudes
-to assert positive affirmations. 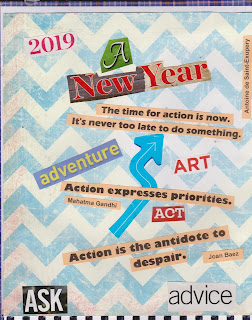 Be sure to check here to wee what others around the world did for A.
Posted by Beverley Baird at 2:36 PM

Indeed, we need to act accordingly and not let the past ruin the future... A bad past is an experience and a good one a memory. Happy new year to you.

I shall, Bev, act accordingly, be an activist, and and actively do art to stay positive. Thank you for the reminder.

Activist! Great A word! Thanks for that.
Thank youo both for stopping by.

Yes, in this environment, keeping a positive attitude is a must, no matter how difficult it becomes.

a good way to ring in the new year! looking ahead, with positive intention, sounds like a great way to keep yourself on track with your goals. good luck!

What a hopeful post to start this new year with!
Thanks for the message at the end - it keeps us all going!

Welcome to round 24 !
Nice to may welcome you again!

Hopefully a year filled with fun and laughter and as less as possible, worries